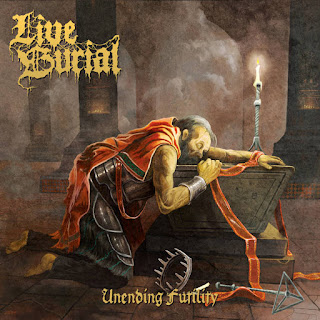 Live Burial is a death metal band from the UK. I nearly skipped this one because the album cover just didn't exactly leap out and scream "awesome death metal" at me, but upon listening I quickly realized what a mistake that would have been. The band features members of Horrified (whose first album I recall enjoying quite a bit) and this is their second full length offering. They manage to dish out that nasty old school sound without getting trapped into the [insert band name here] worship category. From the intro with it's soaring leads followed by a tremolo laced barrage to the near ten minute epic closer "Cemetery Fog" Living Burial are here to flex their death metal muscles and bury any weakling listening alive!

Upon first listen the main thing that stood out immediately was the mix. Everything is balanced out so perfectly here. No instrument is completely dominating and the bass isn't just following the guitar in the same old boring fashion. The two stringed instruments mesh in a way that paints a picture of a dungeon crawling battle that perhaps for the poor fellow on the cover just ended poorly. "The Crypt of Slumbering Madness" truly sounds FUCKING MASSIVE. When this track came on the album really caught my attention. The bass stands out and almost takes the spotlight on this one. Some of the songwriting here is very strong to say the least. The leads that close this track are icing on the metallic cake as well. When the band slows down with their more epic, lethargic approach everything really works to great effect. "Rotting on the Rope" is a great example of Live Burial doing this to near perfection. It's followed up by the beautiful interlude "Winds of Solace". The fretwork here is breathtaking and it works incredibly well with the pacing of the album and it's placement.

The vocals are delivered in a way that really adds to the attention grabbing nature of the album. The playing isn't overly flashy from anyone but definitely has some nice, memorable noodly passages sprinkled in for good measure. As mentioned before the bass really does add a refreshing layer to everything else in the mix and really makes a big stride in making this album stand out from the pack. Everything just comes together in a way that gives "Unending Futility" an insane amount of replay value. It's been in rotation for me for a hot minute now and anytime I find myself going to play a single track I quickly find myself playing the album in full without a second thought. With all the quality stuff that has been dropping lately this statement truly says something about how well put together this project really is.

Overall Unending Futility is a pretty killer death metal album. Upon going back and checking out the first one this is a big step up for my ears. All of the tracks here that break the five minute mark are the cream of the crop. The band does an amazing job creating a foreboding atmosphere with a lingering feeling of dread to top it off. This one comes highly recommended for anyone looking for some good mid paced death metal jams. Don't get me wrong, the album is heavy and has it's fair share of nasty, headbang inducing riffing, but, they also spend a decent chunk of time in a more subdued, crawl of anticipation lurching towards this moments of full-blown badassery. If you plan to be lazy and just skip the album, please at least hit some streaming site and give the opener "Seeping into the Earth" a shot. I feel like anybody with a single death metal loving bone in their body would be hard pressed to not dive a little deeper after hearing that epic slab of metal goodness. Very excited to see what Live Burial comes out of the woodwork next to decimate us. JAM IT!!!

Foul Feast is all about appreciating the underground, and hopefully exposing some of you to new things in the process. The site will covers a mixture of horror flicks and metal/punk from all over the globe.
Foul Feast is always down to accept screeners from filmmakers and releases from bands so if you have anything you want the word spread on feel free to email me at combustion07@hotmail.com for more details. We give everything a fair shot. We also do interviews and inquiries for either of these things can be sent to the email above or sent via PM on the Facebook page (with Facebook the response time will be faster).
If you like what you see follow the page! Add the Facebook page and spread the word! There will be many different types of articles posted here in the future reviewing and discussing some of the best music and horror the underground has to offer.