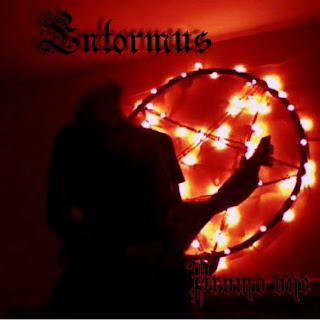 Entormus is a one man black metal project from Gainesville, Texas. Texas has become one of the best locations for US black metal, claiming great acts like Absu and Teratism. Having formed in 2010, Entormus is fairly new to the scene to say the least. This is the first release from the band and it flourishes some good ideas within its thirteen minute run-time.

Essentially the tracks on this promo show three completely different sides of Entormus. None of the three songs are bad by any means but some standout more than others. Given this is a promo it's good way to go about showing the amount versatility the band is capable of incorporating into their sound. Featuring a pretty straightforward black metal track ("Even the Mighty Fall"), a track almost radio friendly in terms of structure ("All that we Get"), and a final track that closes things off perfectly to say the least, it would be a lie to say that Entormus isn't doing their best to put out quality material.

Embracing the laid back sound that has previously been perfected by bands like Summoning in the past, "Desert Infernus" proves to be the highlight of this promo. Starting off slow and building up with a certain grace that gives the listener a feeling of pure nirvana. This is where Entormus leaves their impression. Unlike many other bands that give off this sort of vibe, Entormus throws the listener for a loop and comes back with a hard hitting groovy closing for an otherwise calm, relaxing track. The contrast works well and ends up making the track all the more entertaining.

The guitar playing is a bit simplistic and focuses more on building an atmosphere and instilling emotion more than anything else. That being said catchy riffs are still thrown into the mix as often as possible. The vocals vary a little bit throughout. Consisting mostly of gravely screams and throaty growls. The vocal performance is solid for the most part, but on the track "All that we Get" they come across as very forced. Luckily this isn't a problem on the other two tracks but it definitely takes some of the impact out of that particular song.

Overall this promo is a nice sample of what is to come from Entormus. Though each track may not be as memorable as the last Entormus still leaves a lasting impression. Considering this is Entormus's first effort it is fairly impressive. Featuring one track that will definitely be stored in my memory for awhile and has already been revisited an endless amount of times. Fans of the genre should be able to find something to their liking here. Hopefully we will see more material from Entormus soon. Hearing more in the vain of "Desert Infernus" would be superb to say the least. Worth a listen.
Posted by combustion07 at 11:07 PM

Foul Feast is all about appreciating the underground, and hopefully exposing some of you to new things in the process. The site will covers a mixture of horror flicks and metal/punk from all over the globe.
Foul Feast is always down to accept screeners from filmmakers and releases from bands so if you have anything you want the word spread on feel free to email me at combustion07@hotmail.com for more details. We give everything a fair shot. We also do interviews and inquiries for either of these things can be sent to the email above or sent via PM on the Facebook page (with Facebook the response time will be faster).
If you like what you see follow the page! Add the Facebook page and spread the word! There will be many different types of articles posted here in the future reviewing and discussing some of the best music and horror the underground has to offer.